Residing in the southwest region of Ethiopia, the Hamer tribe is one of the Omo Valley tribes hailing from the Omo river valley in the Debub Omo Zone. With villages in Turmi and Dimeka, they represent approximately 0.1% of the Ethiopian population. The Hamer tribe are quite isolated and are mainly pastoralists with their culture still placing a high value on cattle. They are predominantly Muslims with major activities ranging from honey collection to cattle rearing.

And while there are so many fascinating aspects of the Hamer tribe’s culture, one of the most epics is the famous bull jumping ceremony.

The Culture behind the Bull-Jumping Ceremony 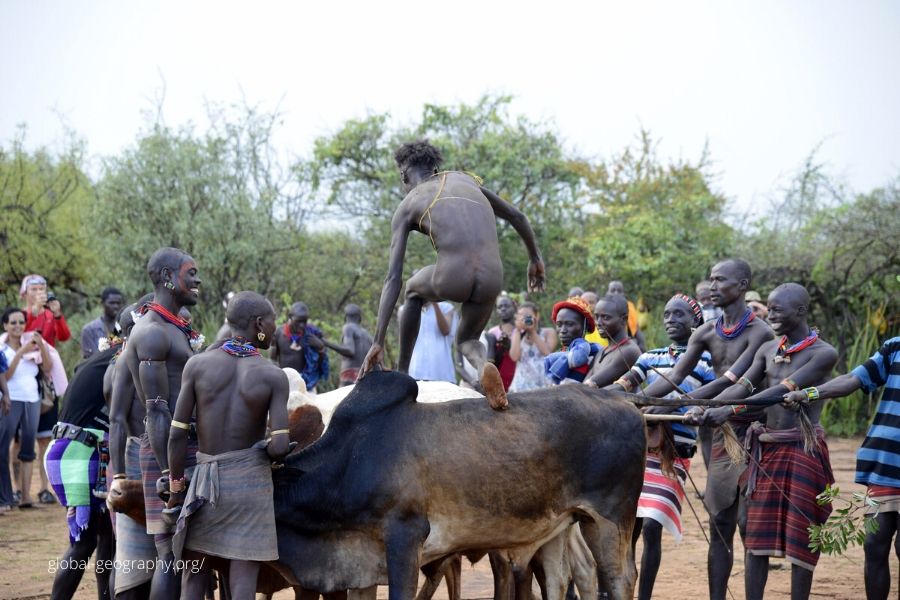 The Hamer tribe bull jumping ceremony is an ancient rite of passage that every young Hamer boy (Ukuli) must go through as they transition into manhood. This famous three-day-long ceremony is graced by most of the tribes across the Omo valley, south-west of Ethiopia. The event usually takes place after their harvest – late September and October.

The bull jumping event involves running across the backs of seven to ten castrated bulls multiple times without falling. It is an important ritual for the Hamer tribe and essentially qualifies young men for marriage, raising children and owning cattle.

The eldest child of the Hamer tribe must go through the bull jumping ceremony rite of passage before his younger ones. The father decides when his eldest son is ready and is given a small phallic wood called Boko. The Boko must be handed to every girl he meets on the way and it must be kissed three times as a form of blessing before handing it back to him. He then makes his way to all his relative’s houses inviting them to the ceremony and also presenting them the Boko. The guests receive a strip of bark with several knots to keep track of the days left before the bull jumping rites.

Preparing for the Hamer bull-jumping ceremony 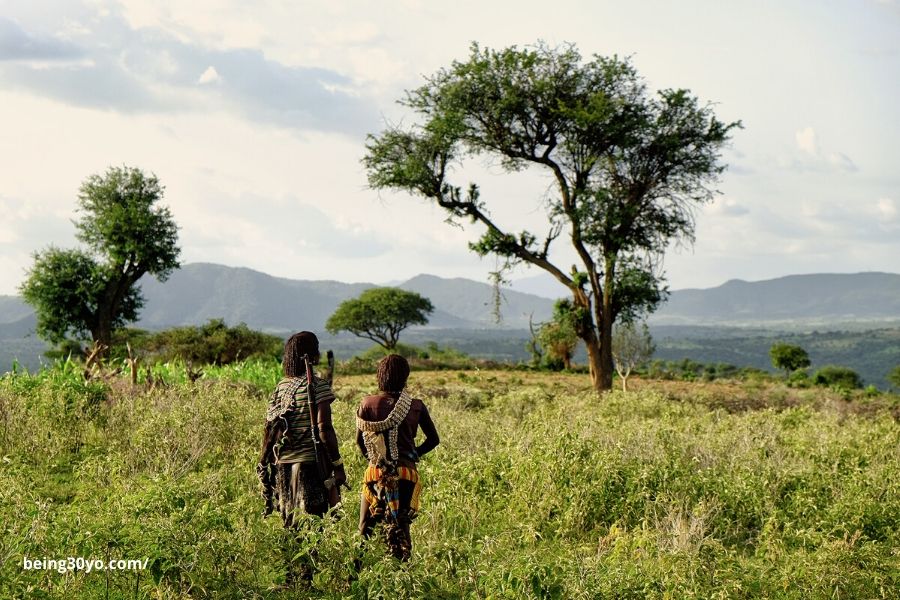 Young women grace the occasion highly adorned and dressed in their traditional outfit. Their bodies and hair are covered with butter and red clay. In circles, they start to dance, sing, whistle and blow horns. The young man’s sins are washed away by partially shaving his hair and rubbing his body with sand. Strips of the bark of trees are strapped around his body in a cross form for spiritual protection and he is smeared with dung to give him strength.

The castrated cows lined up to represent the women and children of the tribe and they are also smeared with dung to make them slippery. The physically challenged are not left out as they are usually helped across by others and must go through with the initiation rights before they are deemed fit to marry the woman chosen by his parents. An alcoholic beverage made with sorghum is served to guests and bride price payments usually amount to 36 goats and 20 cattle.

The Role of The Hamer Tribe Women 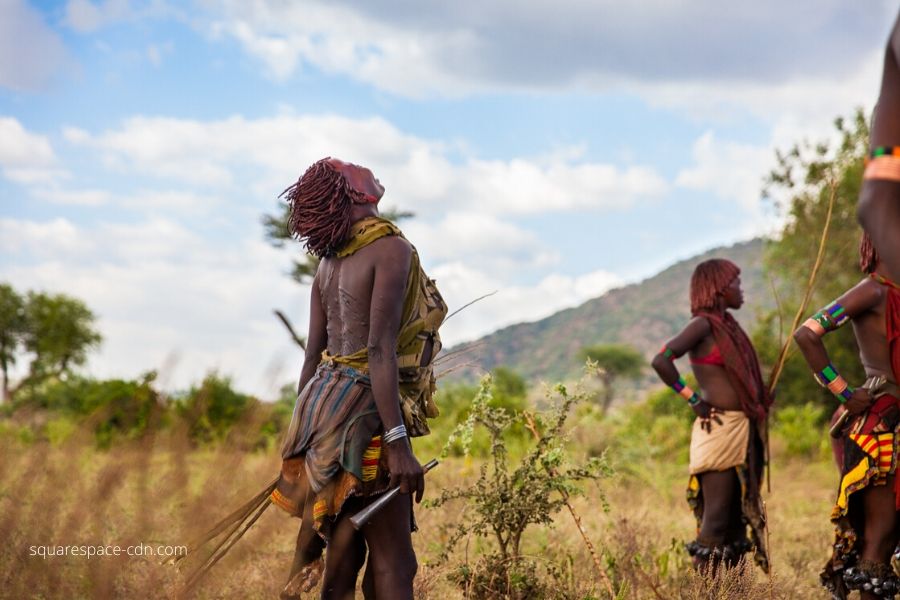 During the whole ceremony, women and young girls are whipped continuously with a birch stick as part of the ritual ceremony. The greater the pain, the higher the level of loyalty and submission the Hamer tribe women show to the groom and the scars are left on their bodies as a symbol of loyalty they are to receive in turn from him. The scars sustained during the ceremony are shown to the young man whenever she may need help in the near future.

Initiating the Boy into Manhood 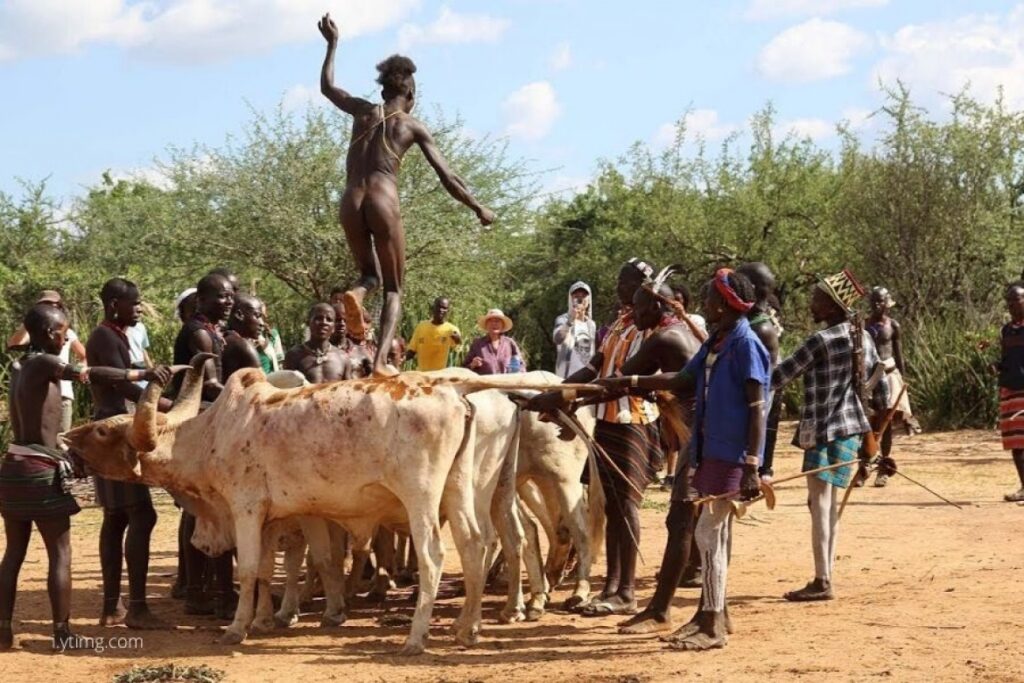 As dawn approaches, it is time for the young boy to be initiated. Tradition dictates that he is stripped naked before he attempts the leap. The climax comes when the jumping occurs. He takes a leap usually four or five times across the castrated cattle demonstrating his agility, valor, and strength.

If he is successful, he is sent to the council of elders and Maza (young men who are still single and have recently done the Hamer tribe bull jumping ceremony. The Maza is situated in a circle surrounded by other men and he has to throw 8 rings in 4 quarters. Depending on where they land, the more or fewer the cattle he would receive from the future wife’s family. He becomes a man once he is successful and animal skin is placed on his neck amid cheers from kinsmen and blows of the horn.

The Hamer tribe bull-jumping ceremony ends with several days of feasting, local beer and coffee flow freely amid invigorating jump dances. You can take as many pictures of the event as you want without being charged.

At the end of the day, this ceremony is a great way to experience a completely new culture firsthand. Make sure you don’t miss this event in the southern region of Ethiopia if you’re planning a trip.